For some nine months I have been craving for something. Like, really really wanting something really bad. But I am kind of really stingy when it comes to clothes. I can see something really beautiful in a shop, but doubt for a full hour if I would buy it or not. Even if it only costs 10 euros or something, I'm just doubting if it would be worth the money.
So that is the reason I haven't been buying a particular item for a very long time. But ten days ago I received a newsletter from AX Paris that said that I could get a 20% discount on the brand. I just couldn't stop myself from checking out the web shop, but in the end I still doubted for a full week, until the last day of the discount arrived. And then it was quite easy: I picked the item, dropped it in my basket and paid. Well, that went smooth!
Last Tuesday I went home because I had had an exam and my next would be in only eight days, and the next day the door bell rang. I just couldn't believe that I had placed an order on Saturday and on Wednesday my package was already there! :D
Want to know what was inside my package? :D 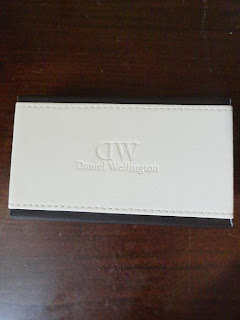 And inside this gorgeous little box was this: 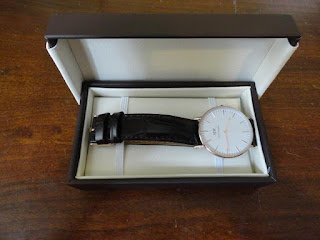 Exactly, for at least nine months I have been craving for a Daniel Wellington watch, which you can find here. Ever since I saw the pictures from bloggers wearing one, I fell in love. So timeless, classic, neat, not calling for attention, not bling bling, but still quite notable. I'm in love! I've been wearing it ever since I've got it, and everybody says it is classic but gorgeous :D
Here you could already read on how I really thought about buying a watch because of panic I felt when I didn't know the time during an exam. No more what-time-is-it?! panic attacks during exams for me now :D


I was really surprised with the delivery of the watch too. As said before I ordered it on Saturday and it arrived on Wednesday, which according to me is rather fast. It was sent with UPS and you also got a tracking number which allowed you to see where the watch was at that moment and in which distribution centers it had passed at which time. I was impressed!


BTW, this is how it looks on my wrist: 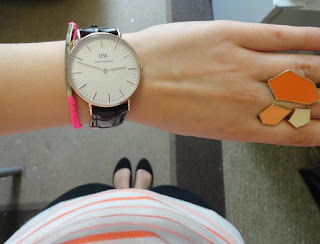 The pink bracelet is a new one, I'll be doing a shoplog on that one soon.
And the ring already had its shoplog, which you can find here.

As you may notice, or not, I have quite thin wrists. I always have problems with bracelets that  they are too wide, and when the watch arrived I was afraid the wristband would be too big too, but even though it's at its closest, it fits perfectly for that thin wrist of mine :D
I just couldn't be happier with my new precious ^^

What do you think about my new watch?
Have you ever been influenced by a blogger?